To choose our future career or just to be able to choose the proper secondary school when we are 13 or 14 year old pupils – it seems to be a difficult issue. We created a 6 weeks program (3-4 hours weekly) for pupils who are in the last grade in primary school. A series of competence mapping sessions was developed in order to give them a guidance through which they can get familiar with their talents/weaknesses in order to prepare them better for the choice of their future high school/vocation. We combined the Tree of life method with training elements in order:

So to offer a different framework, a different point of view to think and answer for the question of the carrier choice. 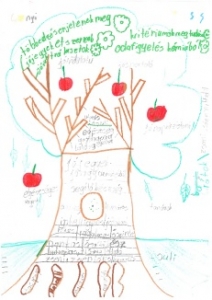 The common work used individual and group work, it was interactive, it was differentiated, the personal development was in the focus, during the process pupils learnt about themselves, but they also understood what competencies they have and the competencies as resources can support their goals, or can be developed; it was playful and offered diverse methods.

The head teacher went through the process with the class, she learnt the tools and the process, and gave a good feedback about the method, but also reported about changes in the attitude of the children. The school choice of the class was more responsible and conscious.

The programme was part of the PEARLS project.

Józsefváros, the 8th district of Budapest has a long history. It was rich and prestigious once, but later on this district became one of the poorest and most diverse parts of the capital. The number of inhabitants in the district decreased between 1997-2004 (0-2% yearly),but after 2004 the tendency seems to turn back slowly. The exodus characterizes Budapest, but higher in Józsefváros mainly among the more educated inhabitants. The closure of the population decline is caused by the district rehabilitation and the construction (housing) boom.

In the level of education - there are big differences in the district itself, but the proportion of the highly qualified people in the examined part of the district is the lowest: 36-38% of the 18-60 age group completed primary school as a maximum and 7% did not complete the primary education.

The occupation rates of the inhabitants are very low, the unemployment rates are high.

The proportion of those who economically are inactive is very high, which means that 44% of the heads of the households are not active, only the 41% works full-time. Causes of inactivity are:  old-age or disability pension, unemployment or health problem

There are many immigrants, mainly Chines and Vietnamese.

The school - Losonci Primary School - is in the middle of the 8th district, among blocks built during the socialist regime. The school has been functioning for 35 years.

Segregation appears in local schools. Its main reason is spontaneous - the parents enroll their children in schools with higher prestige. And this prestige and also the difference in success can be seen in statistics. The number of pupils who continue their studies in (low prestige) vocational schools is higher than the national average.

Living standard of the pupils families - based on a research (questionnaire) with pupils: from 220 pupils very poor: 8; poor: 28; average: 147; well-to-do: 34; rich: 3. As a consequence we can say that the majority of the children live in poor conditions, poorness.

The diversity of social groups, the diversity of cultures, which appear in the school induce the teachers to apply various methods in teaching - projects, thematic days and weeks, cooperative technics and differentiation. As the living standard of pupils is low therefore the cultural and social education in the school is an additional key-element. 60-65% of pupils are Roma, they practice the Roma tradition and costume, but! it is important to say that they come from different Roma groups with different tradition and social acceptance (e.g. the Musicians are assimilated into the Hungarian society).

The research concludes that the family background of the pupils is poor, the conditions for an efficient learning environment are not provided at home. Therefore the school has to accept and provide the responsibility to help these pupils in their studies and also to compensate the shortcomings.

More info about the Pearls projectThe tree of life

You can also upload your own good practice